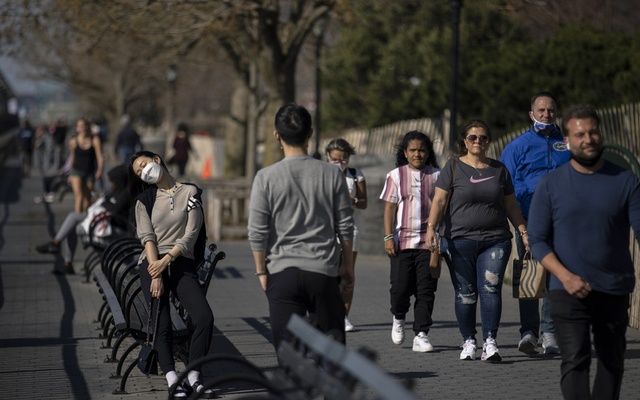 An investment banker with a young family, he travelled every week, often to multiple cities within the course of several days. He might call into one of our monthly meetings from Dallas, but he had been in Tokyo the day before and was on his way to Brussels the next. Before the pandemic, his schedule put him in Asia once a quarter and in Europe nearly every week.

When I caught up with him recently, I wondered what this unusual year of stillness had been like for him, whether he had grown antsy. How easily does the road warrior lay down his boarding pass, submit to the gods of house-tending and say, “Take me”? He had left New York on business only once during the entire year — flying to St Louis and returning the same day.

“It was as though I had PTSD from that single trip,” he told me, recounting the bad food, the bumpy ride to the airport, the rickety plane and the terrible infrastructure, as if they had all come back in a whoosh. “I have not missed one second of domestic or international travel. What has replaced it? Exercise. Being with your kids. Greater productivity.

“No one in my world is saying, ‘Wow, I can’t wait to get back to doing everything the way we did it before.’”

What will we preserve of COVID life when its tragedies and deprivations begin to recede? For people fortunate enough to have spent the past year working from their houses and apartments, even if at makeshift desks or in closets, the profound rearrangements to professional, domestic and social life have, in many cases, shifted priorities and brought a new kind of enlightenment.

Even for those not in the habit of flying to Geneva every Monday, the time otherwise spent commuting has been put to better use — working, dog walking, running, grocery shopping, hugging the children you are no longer angrily pushing out the door in the morning, because there is nowhere to go.

In the fall, a working paper out of the Becker Friedman Institute at the University of Chicago revealed that Americans were commuting 60 million fewer hours per day, and they were devoting two-thirds of that time to themselves — home improvement, chores, family, leisure and so on.

Residents of New York state had the longest commuting times of workers anywhere in the country — an average of 66 minutes a day. For all the new anxieties that gripped us, a certain ease and strengthened sense of connection evolved in tandem with them; at the very least, you now had an extra hour a day for Headspace or teletherapy or Googling exes.

Last month, urban theorist Richard Florida struck a chord on Twitter when he expressed something many people were feeling but have been ashamed to admit — that there were aspects of lockdown they really liked. “I feel melancholy about returning to the old normal,” he wrote. “I have gotten off the rat race. I found something deeper in this strange pandemic life that I am not sure I want to give up.” Also accustomed to constant travel, he had been able to spend time with his young children.

“They say the years before 4 are the most important,” he told me, “and I was there for a full year.” Much to his surprise, and despite the limitations of lecturing via Zoom, he received the highest teacher ratings of his career. His class at the University of Toronto, “The City and Business,” benefited from all the guest speakers he could bring into an online classroom — experts from around the world who were unlikely to travel to Canada to spend 45 minutes talking about municipal financing.

Florida, who lives in the Rosedale section of Toronto, not far from the university, got to know his neighbourhood in ways he hadn’t previously. “I used to bike on the weekdays before the pandemic, but I was the only man over 50; there were women and children and nannies, and I was, like, this strange guy lurking around,” he said. But now, so many more people were outside and wandering, and Florida met them — men with whom he has formed close friendships. (During the past year, he biked more, drank less and lost 25 pounds, he told me.)

The serendipity of social life now is something that I have really come to appreciate — texting a friend at 8 am and meeting her for a walk, plans dictated only by the weather. When there is very little to do, there is very little to schedule, which means that it is hard to remember the last time you were forced to exchange 14 emails over three days to land on a dinner date with two other people — one of them flying in from Cleveland — six weeks down the line.

The status competition that has always animated New York — social, professional, intellectual, parental — seems to have faded, if only because it is so much easier to avoid. One distinct advantage to reduced human contact is the marked decline in unpleasant encounters with the perpetually self-marketing — the people who can’t wait to tell you that their 4-year-old is reading “The Decameron” or how great the skiing was in Alta, Utah, over winter break. You know what you don’t have to do during a pandemic? You don’t have to go to a class potluck thrown by someone whose sole purpose is showing off a $ 2 million town house renovation. With oblivion comes psychic peace.

The people who cannot isolate themselves from the obnoxiously wealthy are, of course, the people who serve them. If the current crisis has deepened economic inequality, it has also amplified the distinction between the routines of an emergent working-leisure class, in full control of how its time is managed, and an on-call class, consisting of workers who must remain forever in motion both to earn a living and to meet the needs of the affluent.

Many people will be able to carry the best of the pandemic lifestyle into the future — getting on the Peloton between morning meetings. Companies, in many instances, will be delighted to shrink their real estate footprints and shift the burdens and expenses of office management onto employees operating at home.

But millions of other people will be trapped in jobs that make getting a five-minute break to go to the bathroom an Olympian challenge. And in some sense, this will be if they are lucky enough to have the sort of jobs that won’t be affected by the emptying out of central business districts and the inevitable long-term decline of work travel.

“A lot of people depend on that prior lifestyle,” my banker neighbour said. He expressed concern for all the attendant commerce at La Guardia and JFK International. “The Uber driver, the pilot, the guy who gives me the coffee in the airport. I don’t need to be here, but lots of people in Queens need me to be.”