He made remarks in a discussion at the Foreign Service Academy, attended by Mia Seppo, the resident coordinator of the United Nations in Dhaka, on Monday.

“I have an appeal for all. Instead of paying lip service, you should come forward with sincerity so that these people could be repatriated to their homeland for a better life,” he said.

Bangladesh is sheltering over 11 million Rohingya refugees, who have fled persecution in Rakhine state of neighbouring Myanmar and taken refuge in the overcrowded camps in Cox’s Bazar.

It reached an agreement with the Myanmar government towards the end of 2017 for the repatriation of the Rohingya, but not a single refugee has gone back.

Prime Minister Sheikh Hasina’s administration has been calling upon the international community to establish an appropriate setting to encourage the Rohingya to return to their homeland. 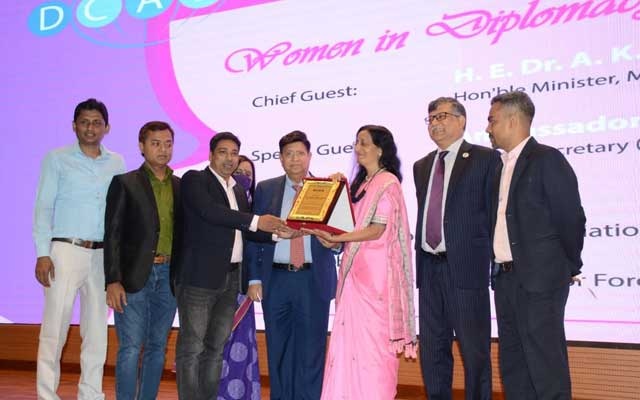 Momen also criticised the international community for not taking strong actions against Myanmar, having only sanctioned “one or two generals”, while continuing to do business with the country.

“The business, both trade and investment in Myanmar, over the last four years after this genocide has increased from three and a half times to fifteen times. This is really shocking,” he said.

“Fifteen times! Can you believe it! A country that has violated human rights, carried out ethnic cleansing, and you promote them through trade and business and yet talk about human rights?”

The government has relocated more than 12,000 Rohingya refugees from Cox’s Bazar to the remote island of Bhasan Char in Noakhali in five phases as part of a plan to shift about 100,000 displaced Myanmar nationals.

International groups, including the United Nations, have expressed concern over the voluntary relocation of the refugees and their safety on the island.

The government has defended the plan, saying the numerous challenges associated with the temporary hosting of the persecuted Rohingya from Myanmar have “compelled” it to take the measure.

Momen called on the rights groups to pay attention to creating a conducive environment in Rakhine state to repatriate Rohingya refugees instead of criticising the Bangladesh government on other issues.

“All the people engaged with them, including international agencies, should come forward. Instead of giving instructions to us, they should be in Rakhine state and do their job to create a conducive environment,” the minister said.

“Whether they are in Kutupalong or Bhasan Char — that is not important. It is irrelevant. The relevant thing is they must go back to their homeland and have a decent future,” he added in response to the criticism over the relocation process to Bhasan Char.

He urged global leaders to take action for the sake of Rohingya women and girls, who are the majority of the refugees in Bangladesh.

“It is time for world leaders to do something. We must provide them with a future.”

Momen said Myanmar should take back the refugees immediately as they had agreed in many bilateral and multilateral forums.

He warned that if the Rohingya refugees stay in the camps longer, they might be recruited by radical groups, which “will create a problem for the whole world”.

Meanwhile, Mia Seppo noted that women in Bangladesh are a large part of the workforce overcoming social, cultural and economic barriers.

“Let’s also remember the women who don’t hold visible positions and who we don’t see in virtual events. At the grassroots level, we’ve seen remarkable acts of resilience, heroism and leadership,” she said.

Israt Jahan Urmi, a member of the DCAB, presented the keynote titled “Women in Diplomacy: How are we doing?” while the president of the organization Pantho Rahman moderated the discussion.

At the event, DCAB honoured Ambassador Mashfee Binte Shams, secretary (east) at the foreign ministry, for her ‘outstanding’ role in promoting Bangladesh through her exceptional leadership in diplomacy.