Does being tall raise the risk of getting Covid-19? Men over 6ft are TWICE as likely to get infected, study claims

Tall people could face a greater risk of getting Covid-19, according to research that adds weight to the theory the disease is airborne.

Data from 2,000 people in the UK and US showed men above 6ft were twice as likely to be diagnosed with the coronavirus.

Women also had higher odds if they were over 6ft tall. But there were so few in the study, the results are not reliable.

The researchers said the findings do not necessarily mean tall people are somehow genetically more vulnerable to the infection.

Instead, the team believe the results indicate Covid-19 spreads through tiny particles called aerosols that linger in the air after being exhaled.

Scientists said taller people would be at no more risk if the virus was mainly spread through sneezing or coughing, which produce larger droplets that fall to the ground quickly.

Health officials have so far ruled out that Covid-19 is airborne. But admitted recently they are reviewing ’emerging evidence’ that it is. 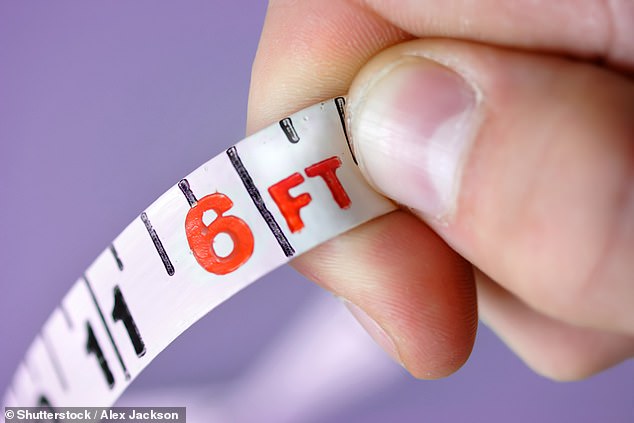 A survey of 2,000 people in the UK and US found the risk of Covid-19 double for people over six feet

The survey results were analysed by a team of data scientists in the UK, Norway and the US, led by experts at the University of Oxford.

The study looked at a range of personal and work-related factors that may affect the risk of infection with SARS-Cov-2, the virus which causes Covid-19.

Respondents were asked about their employment status, income, how they travel to work, if they live with other people and if they socialised a lot among other factors.

Analysis that has yet to be scrutinised by fellow scientists showed taller people were more likely to be diagnosed with Covid-19.

In the UK, men and women faced more than double the risk of Covid-19 compared to those under six feet.

The odds were slightly lower in the US for men but extremely high for women — who were more than nine times more likely to get the virus.

World Health Organization scientists recently admitted there is ‘evidence emerging’ that the coronavirus can be spread through the air.

The UN agency previously said the virus spreads primarily through droplets expelled from the nose and mouth of an infected person.

These quickly sink to the ground but can land in the nose or mouth of other people close by. They also land on surfaces, where the virus can be picked up.

But there have been calls for the WHO to update its guidance to warn the infection can linger in the air and be inhaled by others.

Airborne transmission means that a virus can be spread in droplets so small that they can float in the air and do not fall after being propelled by a cough or sneeze.

Dr Maria Van Kerkhove, the technical lead for Covid-19 at the WHO, confirmed on July 7 that the agency was looking at the theory the bug could be spread via the air.

Speaking at Tuesday’s briefing in Geneva, Benedetta Allegranzi, the WHO’s technical lead for infection prevention and control, said there was evidence emerging of airborne transmission of the coronavirus, but that it was not definitive.

‘The possibility of airborne transmission in public settings – especially in very specific conditions, crowded, closed, poorly ventilated settings that have been described, cannot be ruled out,’ she said.

‘However, the evidence needs to be gathered and interpreted, and we continue to support this.’

The WHO’s consideration follows 239 scientists in 32 countries writing to the UN agency asking it to acknowledge the growing evidence the virus is airborne.

One professor who signed the paper said there will be concern to label the virus airborne because it may cause panic.

But because there were such a tiny proportion of women over six feet in the data, the researchers did not say the finding was significant.

The link between height and Covid-19 was only seen in the UK, and the researchers did not offer an explanation for this.

It may be explained by other factors such as larger men working in construction, where they may be at greater risk.

Height has previously been linked to the development of diseases such as dementia and an irregular heart beat, which scientists believe could be due to genetic variants or growth hormones.

But in this study, the researchers did not suggest tall people were more at risk of Covid-19 due to their biology.

The findings support the theory that tiny coronavirus particles emitted through exhaling and speaking may linger in the air for hours.

World Health Organization scientists earlier this month admitted there is ‘evidence emerging’ that the coronavirus can be spread through the air.

The UN agency previously said the virus spreads primarily through droplets expelled from the nose and mouth of an infected person.

These quickly sink to the ground but can land in the nose or mouth of other people close by. They also land on surfaces, where the virus can be picked up.

But there have been calls for the WHO to update its guidance to warn the infection can linger in the air and be inhaled by others.

Airborne transmission means a virus can be spread in aerosols — droplets so small that they can float in the air after being exhaled.

Experts said taller people wouldn’t be at any higher risk if transmission was mainly through droplets — but because they are taller they may be exposed to more of the particles, the team hypothesized.

The paper — which has not yet been published in a medical journal — said: ‘If large downward falling droplets were more significant, then taller people might be expected to be less at risk.’

The one to two metre social distancing rule is based on the fact droplets do not carry through the air.

But if SARS-Cov-2 does indeed spread via aerosols, as growing evidence suggests, it would have huge implications for controlling the disease.

It could mean mask wearing is even more important than thought, according to Professor Evan Kontopantelis, from the University of Manchester.

Discussing the findings, he said: ‘The results of this survey… suggest… aerosol transmission is possible.

‘This has been suggested by other studies but our method of confirmation is novel.

‘Though social distancing is still important because transmission by droplets is still likely to occur, it does suggest that mask wearing may be just as if not more effective in prevention.

‘But also, air purification in interior spaces should be further explored.’

Professor Paul Anand, a research director at the Open University said: ‘Much scientific research has focussed on patterns of spread and underlying mechanisms of transmission.

‘But as economies and societies reopen, it is important to know more about the role personal factors as predictors of transmission.

‘Though both are market economies, the US and UK differ in the extent and manner in they provide access to health care and welfare support – and that to some extent is demonstrated by the associations shown by the data.’

The study also found people were more likely to get coronavirus if they needed to travel to work using public transport.

Though the paper has yet to be peer reviewed, the authors wanted to reveal their findings amid the debate over aerosol transmission.

Commenting on the findings, Paul Hunter, a professor in medicine at the University of East Anglia, said: ‘In my view this preprint should be interpreted with caution.

‘The authors analysed a substantial number of possible predictors for a range of outcome measures.

‘One of the biggest mistakes that people make with epidemiological surveys is multiple hypothesis testing. The more hypothesis tests you do the more likely you are to flag up associations that have only arisen by chance.

‘In my view this analysis does not even provide convincing evidence that tall people are protected from the infection never mind whether this means that there is aerosol transmission.’

HOW DOES COVID-19 SPREAD?

The World Health Organization says the virus that causes Covid-19 is primarily transmitted between people through respiratory droplets, which come out of the airways when people breathe.

Droplets, which contain saliva, mucous and other substances from the airways, including viruses, are larger than pure air particles.

After being expelled from the body they travel short distances before falling to the floor, which is why social distancing is so crucial.

The droplets, which can carry viruses, can land directly into another person’s nose or mouth if not caught in a tissue. Or, they fall due to gravity and land on surfaces, where it can live for up to three days.

If someone else touches that contaminated surface, the virus can transfer onto their hand and then enter the body and cause infection next time they touch their eyes, nose or mouth.

The WHO says it is now looking at the evidence that SARS-CoV-2 is airborne, meaning it could be emitted in breath.

Airborne transmission is different from droplet transmission as it refers to the presence of microbes within droplet nuclei, which are generally considered to be particles less than 5μm in diameter.

They can remain in the air for long periods of time, meaning transmission can occur when the contagious person has left the room, and be transmitted to others over distances greater than one metre.