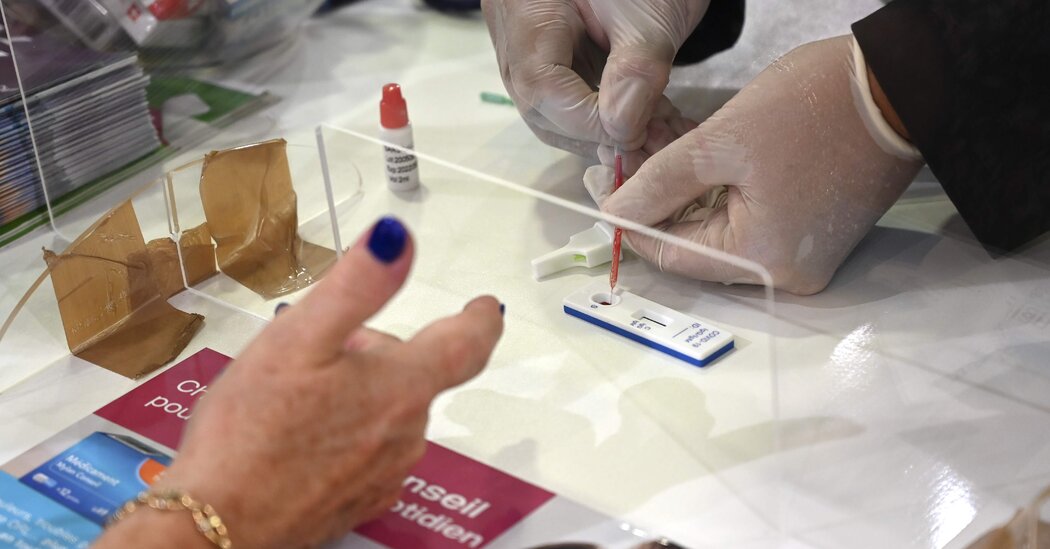 Your blood carries the memory of every pathogen you’ve ever encountered. If you’ve been infected with the coronavirus, your body most likely remembers that, too.

Antibodies are the legacy of that encounter. Why, then, have so many people stricken by the virus discovered that they don’t seem to have antibodies?

Most commercial antibody tests offer crude yes-no answers. The tests are notorious for delivering false positives — results indicating that someone has antibodies when he or she does not.

But the volume of coronavirus antibodies drops sharply once the acute illness ends. Now it is increasingly clear that these tests may also produce false-negative results, missing antibodies to the coronavirus that are present at low levels.

Moreover, some tests — including those made by Abbott and Roche and offered by Quest Labs and LabCorp — are designed to detect a subtype of antibodies that doesn’t confer immunity and may wane even faster than the kind that can destroy the virus.

What that means is that declining antibodies, as shown by commercial tests, don’t necessarily mean declining immunity, several experts said. Long-term surveys of antibodies, intended to assess how widely the coronavirus has spread, may also underestimate the true prevalence.

“We’re learning a lot about how antibodies change over time,” said Dr. Fiona Havers, a medical epidemiologist who has led such surveys for the Centers for Disease Control and Prevention.

If the narrative on immunity to the coronavirus has seemed to shift constantly, it’s in part because the virus was a stranger to scientists. But it’s increasingly clear that this virus behaves much like any other.

This is how immunity to viruses generally works: The initial encounter with a pathogen — typically in childhood — surprises the body. The resulting illness can be mild or severe, depending on the dose of the virus and the child’s health, access to health care and genetics.

A mild illness may trigger production of only a few antibodies, and a severe one many more. The vast majority of people who become infected with the coronavirus have few to no symptoms, and those people may produce a milder immune response than those who become severely ill, Dr. Havers said.

But even a minor infection is often enough to teach the body to recognize the intruder.

After the battle ends, balloon-like cells that live in the bone marrow steadily pump out a small number of specialized assassins. The next time — and every time after that — that the body comes across the virus, those cells can mass-produce antibodies within hours.

The mnemonic response grows stronger with every encounter. It’s one of the great miracles of the human body.

“Whatever your level is today, if you get infected, your antibody titers are going to go way up,” said Dr. Michael Mina, an immunologist at Harvard University, referring to the levels of antibodies in the blood. “The virus will never even have a chance the second time around.”

Read More:  Less than half of Irish adults will get flu vaccine study shows

A single drop of blood contains billions of antibodies, all lying in wait for their specific targets. Sometimes, as may be the case for antibodies to the coronavirus, there are too few to get a positive signal on a test — but that does not mean the person tested has no immunity to the virus.

“Even if their antibodies wane below the limits of detection of our instruments, it doesn’t mean their ‘memory’ is gone,” Dr. Mina said.

A small number of people may not produce any antibodies to the coronavirus. But even in that unlikely event, they will have so-called cellular immunity, which includes T cells that learn to identify and destroy the virus. Virtually everyone infected with the coronavirus seems to develop T-cell responses, according to several recent studies.

“This means that even if the antibody titer is low, those people who are previously infected may have a good enough T-cell response that can provide protection,” said Akiko Iwasaki, an immunologist at Yale University.

T cells are harder to detect and to study, however, so when it comes to immunity, antibodies have received all of the attention. The coronavirus carries several antigens — proteins or pieces of a protein — that can provoke the body into producing antibodies.

The most powerful antibodies recognize a piece of the coronavirus’s spike protein, the receptor binding domain, or R.B.D. That is the part of the virus that docks onto human cells. Only antibodies that recognize the R.B.D. can neutralize the virus and prevent infection.

But the Roche and Abbott tests that are now widely available — and several others authorized by the Food and Drug Administration — instead look for antibodies to a protein called the nucleocapsid, or N, that is bound up with the virus’s genetic material.

Some scientists were stunned to hear of this choice.

“God, I did not realize that — that’s crazy,” said Angela Rasmussen, a virologist at Columbia University in New York. “It’s kind of puzzling to design a test that’s not looking for what’s thought to be the major antigen.”

Officials at the Food and Drug Administration did not respond to requests for comment on whether the two tests target the appropriate antibodies.

There’s another wrinkle to the story. Some reports now suggest that antibodies to the viral nucleocapsid may decline faster than those to R.B.D. or to the entire spike — the really effective ones.

“The majority of people are getting tested for anti-N antibody, which does tend to wane more rapidly — and so, you know, it may be not the most suitable test for looking at neutralizing capacity,” Dr. Iwasaki said.

Read More:  What Should We Even Expect from the Logan Paul vs. Floyd Mayweather Fight?

In the United States, millions of people have taken the Roche and Abbott tests. LabCorp alone has performed more than two million antibody tests made by the two manufacturers.

Quest relies on tests made by Abbott, Ortho Clinical and Euroimmun. Quest declined to reveal what proportion of the 2.7 million tests it has deployed so far were made by Abbott.

Dr. Jonathan Berz, a physician in Boston, tested positive for the virus in early April but felt fine, apart from a sore throat. His wife was sicker, and despite several negative diagnostic tests, she remained ill for weeks.

“Initially, we felt as a family that, ‘Oh wow, we got sick, unfortunately,’” Dr. Berz said. “But the good side of that is that we’re going to have immunity.’”

In early June, the couple and their two children took Abbott antibody tests processed by Quest. All four turned up negative. Even though Dr. Berz knew that immunity is complex and that T cells also play a role, he was disappointed.

As a doctor in a Covid-19 clinic, he had always acted as though he was at risk for infection. But after seeing the antibody results, he said, “my level of anxiety just increased.”

A spokeswoman at Abbott said the test had 100 percent sensitivity 17 days after symptoms began but did not provide information about sensitivity beyond that time.

Dr. Beatus Ofenloch-Haehnle, who heads immunoassay research at Roche, defended the company’s antibody test. His team has tracked N antibodies in 130 people who had mild to no symptoms and has not yet seen a decline, he said.

“There is some fluctuation, but no waning at all,” he said. “We have a lot of data, and we do not rely anymore on theory.” The N antibody can be a decent proxy for immunity, Dr. Ofenloch-Haehnle added.

He also pointed to a study by Public Health England that suggested that the Abbott and Roche tests seemed to perform well up to 73 days after symptom onset. “I think we should be careful to jump to conclusions too soon,” he said.

Other experts also urged caution. Without more information about what antibody testing results mean, they said, people should do as Dr. Berz did: Act as though they do not have immunity.

There is no definitive information as yet on what levels of antibodies are needed for immunity or how long that protection might last. “I think we’re getting closer and closer to that knowledge,” Dr. Iwasaki said.