In 2020, most Black people, men and women alike, feel it is a bad time to be Black in America. 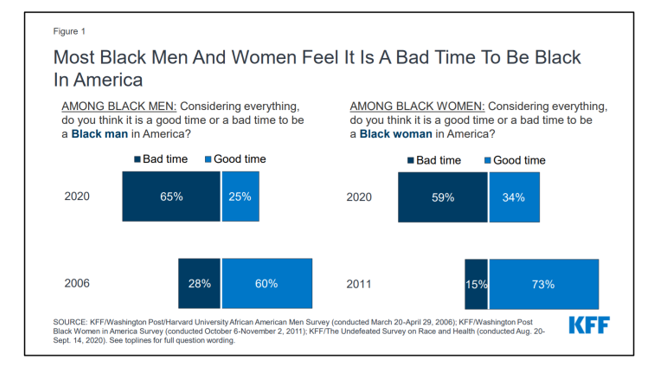 KFF collaborated with The Undefeated, ESPN’s project that focuses on sports, race, and culture. The Undefeated program was started in May 2016, and has become a thought leader on topics of race and sports in America.

This survey was conducted between 20th August and 14th September among 1,769 U.S. adults which included 777 Black Americans.

The study found that the two biggest concerns facing Americans were finances and COVID-19 — but the impacts of these two stresses varied by race/ethnicity: a greater percent of Blacks (36%) and Hispanics (29%) rated financial concerns marginally higher than COVID-19, 34% and 26% respectively. 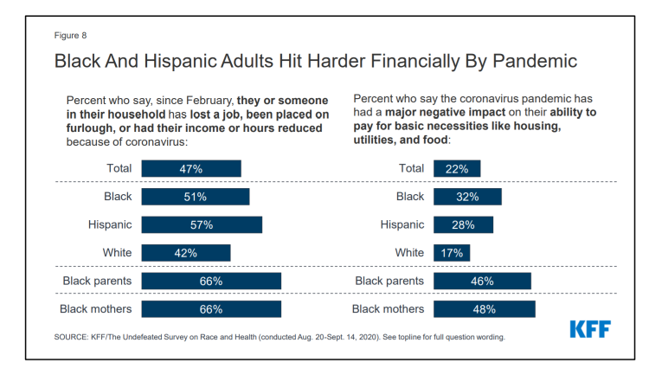 The financial wellness worry in the pandemic is shown in more detail in the second chart from the report. Overall, since February 2020, 47% of Americans said they or someone in their household had lost a job, been put on furlough, or had income or hours reduced.

Black and Hispanic Americans felt greater financial stress since the start of the coronavirus pandemic, breaking 51% for Black people, 57% of Hispanics, and 42% for Whites.

Risks of social determinants of health like paying for housing, utilities, and food, have been a greater burden during the public health crisis for Black people (32%) and Hispanic folks (28%) than for White people in America (17%), with an average of 22% at-risk for SDoH factors.

Black parents and mothers, in particular, were much more likely to feel the stressors of social determinant risks than the overall U.S. population by a factor of 2 to 1. 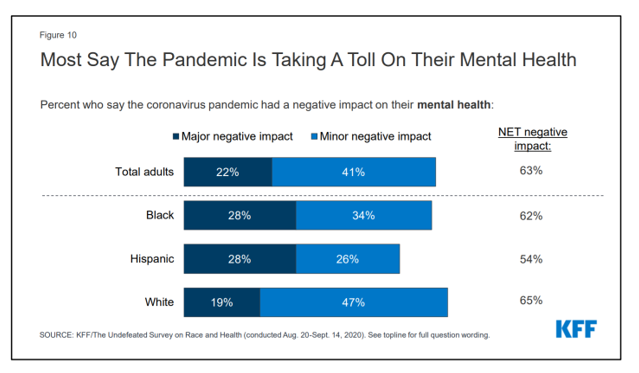 Beyond the COVID-19 virus’s toll on physical health, the pandemic has taken a toll on Americans’ mental health with 22% of all people noting a major negative mental health impact.

The pandemic’s mental health toll has been tough across race/ethnicity, as the NET negative impact in the third chart shows roughly one-half to two-thirds of people across demographics have felt negative mental health burdens.

The public health pandemic has converged in 2020 with the negative impacts of financial stress and mental health tolls. 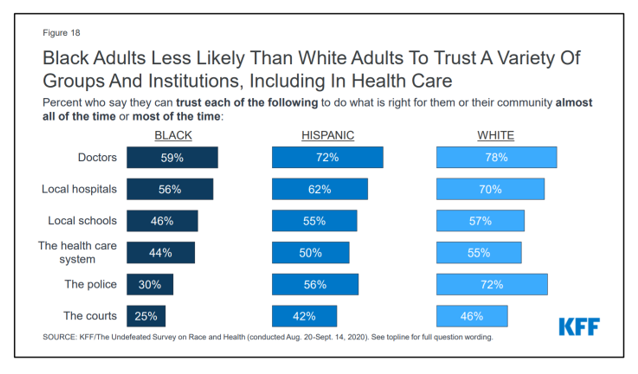 But COVID-19 has also revealed what many see as systemic racism, historic wealth gaps, bias (both unconscious and overt acts of discrimination), and lack of access to social determinants factors like education, housing, and food security. Many more Black adults than White adults perceived these gaps in the Undefeated study.

This underpins Black peoples’ trust-gaps in America for many institutions, including health care (the system, doctors and hospitals), schools, the police and courts, shown in the fourth chart.

That lack of trust sadly underpins two other findings in this study: that most Black adults say the government’s pandemic response would have been stronger if more White people were affected; and, greater vaccine hesitancy among Black Americans than Whites, even among those who would usually get a flu vaccine. 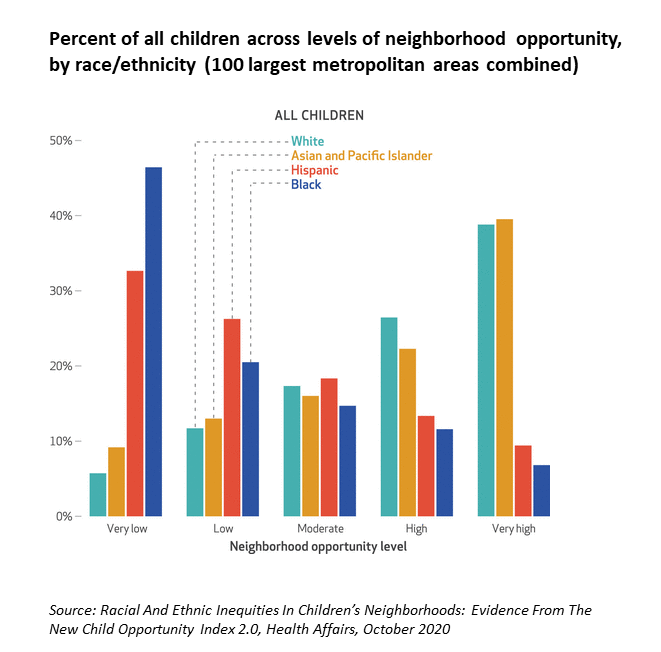 Health Populi’s Hot Points:  A new study exploring racial and ethnic inequities in children’s neighborhoods from a team based at the Heller School for Social Policy was published in the October 2020 Health Affairs explores.

The research builds on previous work demonstrating that neighborhoods have a profound impact on early childhood lives, with adverse childhood events (ACEs) shown to be risks for young peoples’ life-long negative health, social, and financial outcomes.

The policy implications recommend that the health sector address place-based interventions and collaborate with other sectors beyond medical care for housing, transportation, food, and other risks that can set a child up for a lifetime of less opportunity and poor health.

The authors also note that the coronavirus pandemic has heightened awareness of racial/ethnic inequities which should give us the opportunity to strengthen our focus on reducing these gaps in U.S. society. 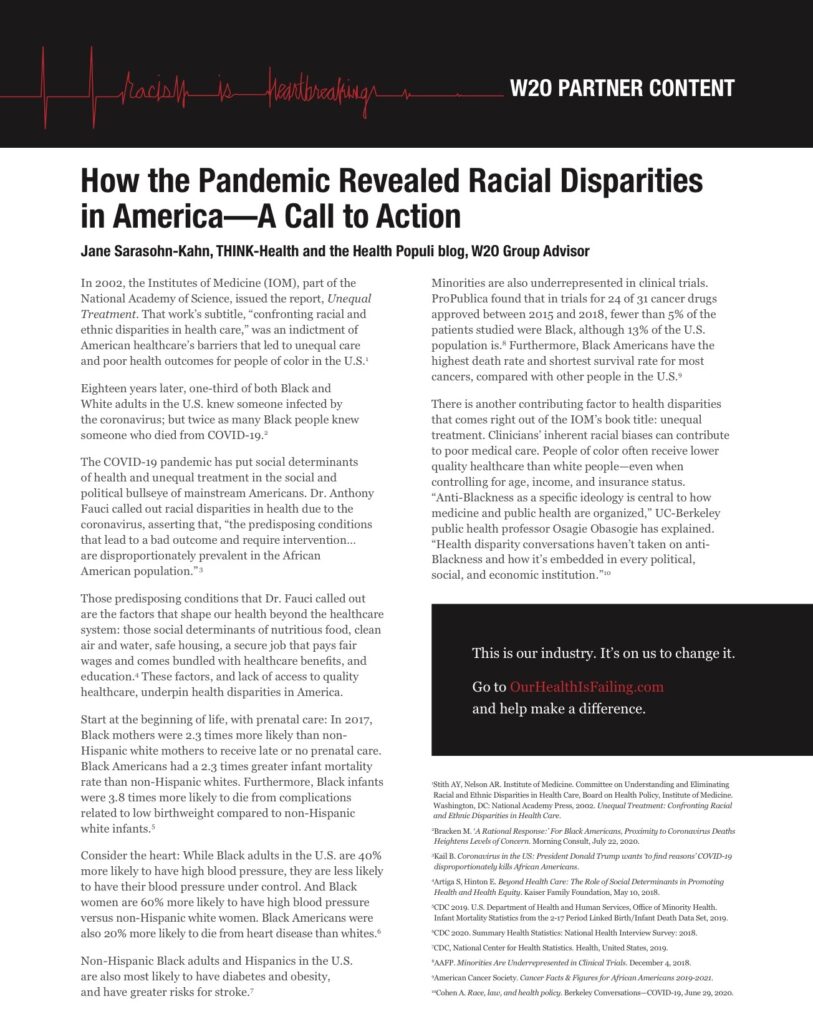 Thanks to my work with the W2O Group, I had the opportunity to provide a Call-to-Action on How the Pandemic Revealed Racial Disparities in America in the September 2020 issue of MM+M magazine.

In this essay, I re-visited the 2002 report from the Institutes of Medicine (IOM), Unequal Treatment, which laid out racial and ethnic disparities in health care.

Eighteen years later, I wrote, one-third of Black and White adults in American knew someone infected by COVID-19; but, twice as many Black people knew someone who died from complications of the coronavirus.

There are too many evidentiary data points that detail health inequities in the United States, some conscious and some not overtly intentional.

The lack of trust between Black people and health care in America is certainly not a new-new thing. The trust-chasm is deep-rooted in America’s health care sins, seeded  in the Tuskegee Airmen “study,” HE-LA (Henrietta Lacks) legacy, and so many other health sector examples.

My W2O colleagues crafted the call-to-action shown in the black box here:

This is our industry. It’s on us to change it.

This is part of claiming our health citizenship, especially as people working in the health/care ecosystem. For Americans, voting on 3rd November in the U.S. elections, up and down the ballot, is one way to engage with your health citizenship. Health is everywhere — embedded in public policies addressing housing, transportation, food systems, fair wages and, indeed, in health care and the assurance of health insurance for all.

Thanks to KFF and the Undefeated for conducting this research, which reinforces Martin Luther King, Jr.’s, observation:

Of all the forms of inequality, injustice in health care is the most shocking and inhumane.”