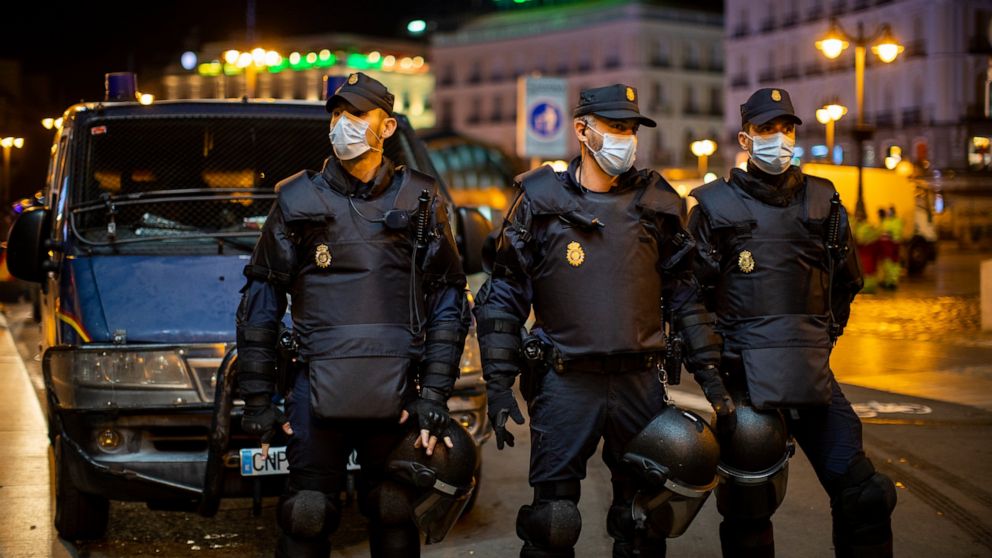 JERUSALEM — Israel reopened elementary school classes after a six-week shutdown on Sunday as the country eases restrictions following a nationwide lockdown that began in September.

First to fourth grade students will attend school four days a week, with up to 20 students in each class. Students and teachers are required to wear face masks in class.

Group prayers are also now allowed with up to 10 people indoors and 20 in open spaces. Hairdressers and beauty salons across the country have too been allowed to reopen. Other businesses, including street shops, will remain closed until next Sunday.

Israel imposed a second nationwide lockdown on Sept. 18 as the country saw one of the highest per capita infection rates.

Israel’s Health Ministry has recorded over 314,000 cases of the coronavirus and 2,541 deaths.

HERE’S WHAT YOU NEED TO KNOW ABOUT THE VIRUS OUTBREAK:

— Halloween in the pandemic: Costumes and candy, at a distance

— Efraín Valles once guided world leaders and pop stars through the land of the Incas. He now makes ice cream to survive.

— The Netherlands will halt its multibillion euro coronavirus bailout to national carrier KLM amid a standoff with a pilot’s union about the rescue package.

— Austria has announced a partial shutdown with restaurants and bars closed for four weeks, cultural, sports and leisure activities canceled and residents asked to stay home after 8 p.m.

HERE’S WHAT ELSE IS HAPPENING:

LONDON — British Prime Minister Boris Johnson has announced a new month-long lockdown for England after being warned that without tough action a resurgent coronavirus outbreak will overwhelm hospitals in weeks.

On the day the U.K. passed 1 million confirmed COVID-19 cases, Johnson made a sudden about-face Saturday and confirmed that stringent restrictions on business and daily life would begin Thursday and last until Dec. 2.

He said at a televised news conference that “no responsible prime minister” could ignore the grim figures.

“Unless we act, we could see deaths in this country running at several thousand a day,” said Johnson, who was hospitalized earlier this year for a serious case of COVID-19.

Under the new restrictions, bars and restaurants can only offer take-out, non-essential shops must close and people will only be able to leave home for a short list of reasons including exercise. Activities ranging from haircuts to foreign holidays must once again be put on hold.

In Melbourne, the capital of Victoria state, which had the highest number of cases in the country, residents were enjoying the first weekend of cafes, restaurants and pubs reopening to walk-in customers.

The city only has one mystery case without a known source. There are 61 active cases left across the state, down from 70 on Saturday.

State Deputy Premier James Merlino hailed Sunday’s zero figures as “another great day for Victoria,” but urged caution ahead of Australia’s most-prestigious horse race on Tuesday, the Melbourne Cup, known as the “race that stops a nation.” Australians traditionally gather in bars or in private homes to watch the event, a public holiday.

The race attracts crowds of more than 100,000 at Melbourne’s Flemington race course, but this year it will held without fans because of restrictions on public gatherings.

India’s health ministry on Sunday also registered 470 more deaths, taking total fatalities up to 122,111. The latest surge takes the country’s total virus tally to close to 8.2 million and is only behind the U.S.

India saw a steep rise in cases in July but it is seeing a slower pace of coronavirus spread since mid-September, when daily infections touched a record of 97,894. But health experts warn that mask and distancing fatigue is setting in and can lead to a fresh wave of infections.

Some experts question the country’s testing methods and warn that a major festival due in a few weeks and the winter season could result in a new burst of infections.

Burhan Kuzu, 65, had been receiving treatment for COVID-19 since Oct. 17, the country’s health minister tweeted. He passed away Sunday. A constitutional lawyer and a founding member of the governing Justice and Development Party, Kuzu served in parliament four times.

Two senior officials close to Turkey’s leader — presidential spokesman Ibrahim Kalin and Interior Minister Suleyman Soylu — tweeted Saturday that they had contracted COVID-19. Both said they were doing well. Soylu was in a hospital.

Turkey has seen over 10,000 deaths in the pandemic but some experts have questioned whether the government is downplaying the true extent of the country’s outbreak with the way it counts cases.

JERUSALEM – Dozens of members of Israel’s Druze Arab minority stormed a hospital in northern Israel and seized the body of a sheikh who died from the coronavirus. Later Saturday, his followers held a large funeral for him against safety guidelines.

The crowd stormed the hospital late Friday in the northern town of Safed. TV stations showed videos of dozens of followers entering the building. The funeral took place in the Israeli-annexed Golan Heights town of Majdal Shams, which has been placed under a lockdown due to the high rate of coronavirus infections. Thousands of Druze people participated in the funeral procession, despite a ban on large gatherings.

Later Saturday, Sheikh Muwafaq Tarif, the spiritual leader of the Druze sect, said the family of the deceased and the Druze leadership were not consulted before the body was taken from the hospital. He appealed for Druze to abide by health restrictions, Israel’s public radio Arabic service reported.

The reports say that Israeli police are investigating the incidents.

Israel has begun easing its second nationwide lockdown this month after succeeding in lowering the infection rate, which in September had risen to be one of the highest in the world.

The seven-day rolling average of daily new cases went from 584 on Oct. 16 to 874 on Friday, according to Johns Hopkins University data analyzed by The Associated Press.

Democratic Gov. Steve Sisolak says, “Now is not the time to get complacent or to give into COVID fatigue.”

Sisolak urged residents to wear masks, practice social distancing, frequently wash hands and avoid large crowds. He told people to take the virus seriously to protect others and the economy.

Nevada reported no deaths on Saturday, keeping the confirmed total at 1,777.

JUNEAU, Alaska — Lawmakers, employees and reporters must be screened for the coronavirus when entering the Alaska Capitol.

The Alaska Legislative Council approved the measure, which requires masks in the building and other legislative offices. The council voted to keep the Capitol building closed to the public until at least January, when the next Legislature convenes.

There’s been more than 15,000 cases and 81 confirmed deaths, according to the state Department of Health and Social Services.

ROME — Italy added a record 31,758 coronavirus cases in the last 24 hours and doubled the deaths to nearly 300 on Saturday.

The Health Ministry says approximately one of every seven people receiving swab tests has tested positive in recent days.

Hospitalization rates in late October have started to reach levels last recorded in late May, with 880 people hospitalized for COVID-19 on Friday. Nearly 200 were in intensive care.

The seven-day rolling average of new daily cases rose from 772 on Oct. 16 to 1,166 on Friday, according to Johns Hopkins University data analyzed by The Associated Press.

ATHENS, Greece — Greece surpassed 2,000 coronavirus cases for the first time since the start of the pandemic.

Authorities says there were 2,056 new cases in the past day and six deaths.

The government announced new lockdown measures Saturday to stem the rapid rise in new cases. The restrictions, including the closure of bars, cafes, restaurants and gyms in large swaths of the country, will take effect Tuesday through at least the end of November.

Chancellor Sebastian Kurz says Austrians will stay home between 8 p.m. and 6 a.m., although they can go out for work and exercise. He requested citizens work from home when possible.

Kurz says the restrictions will last through November. He characterized it as a “second lockdown” but more lenient because schools, non-essential shops and hairdressers can stay open.

Austria has reported 301 cases per 100,000 residents in the past seven days. That compares with 110 in neighboring Germany, which is imposing a somewhat lighter four-week partial shutdown starting Monday.