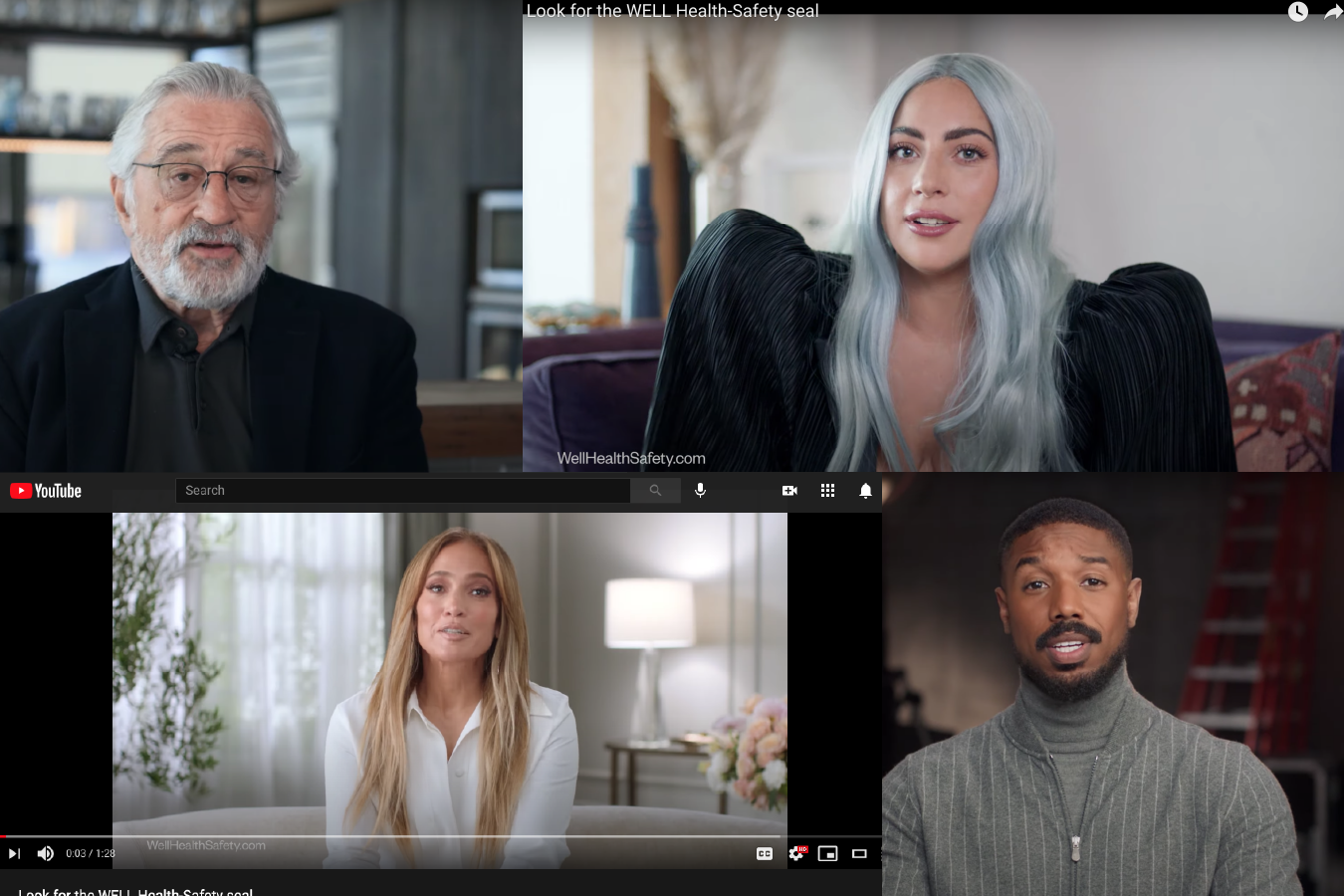 Viewers could be excused for thinking Robert De Niro was just being a good fella in an ad promoting safe buildings amid the covid pandemic, along with the likes of Jennifer Lopez, Lady Gaga and Michael B. Jordan.

They would be wrong.

De Niro and the other A-list celebs are backing something called the Well Health-Safety seal, offered by the International Well Building Institute. The organization, a for-profit subsidiary of a decade-old real estate service company called Delos, is piggybacking on post-pandemic anxiety to profit by popularizing its healthy building certification program.

“Feeling safe should be a right for all, not a privilege for some,” De Niro says in one spot.

What the ad doesn’t tell viewers, though, is that the seal itself is something of a privilege that must be bought. Companies pay — sometimes a lot — to be judged on a range of categories. Some relate directly to covid (such as air quality), but others are less easily measured and have little obvious link to the pandemic (community “connectivities”).

And De Niro, plus Venus Williams, Wolfgang Puck and even New Age guru Deepak Chopra, is being well paid to endorse the Well seal in a carefully planned and executed campaign.

“We compensated them for their time,” IWBI President and CEO Rachel Hodgdon confirmed in an interview, explaining that the effort was modeled on a green schools campaign she ran several years ago at the U.S. Green Building Council. She declined to specify how much it cost to harness all that star power, or how much the company is spending to air the ads.

A spokeswoman said the spots have run nationally since late January on more than 30 networks, including Bravo, MTV, TBS, FX, Paramount, CNBC and CNN, but said the dollars spent “are confidential.”

Read More:  50 Things to Do When You’re Bored

The cost is certainly substantial. Data from the ad-tracking firm iSpot.tv shows that the institute has spent nearly $ 500,000 to air six ads.

“What I wanted to do with this campaign was make it very much in the style of a public service announcement,” Tony Antolino, the chief marketing officer at Delos, told Ad Age.

But the effort very much services the bottom line of Delos.

Not to be confused with the diabolical corporation of the same name in the HBO series Westworld, Delos was founded in 2009 by former Goldman Sachs partner Paul Scialla with the aim of linking real estate to the health and wellness industry.

The company has raised $ 237 million from investors, including Bill Gates, according to Forbes.

In interviews, Scialla describes himself as an “altruistic capitalist.” He told the Los Angeles luxury lifestyle publication Dreams that he saw “a unique opportunity to merge the world’s largest asset class — the $ 180 trillion worth of real estate — with the world’s fastest growing industry — wellness.”

Putting together an all-star cast for a for-profit venture took some doing.

“It wasn’t a fast process, because each of these celebrities and influencers has a rigorous process through which they filter any opportunity,” said Hodgdon, who also got director Spike Lee to ask questions of the famous “ambassadors.”

“We went through a pretty intensive process of educating the celebrities and the teams that work with them on why there was heft and legitimacy behind what we were putting out there,” she said.

She recalled Lady Gaga saying in one interview, “Look, I really believe in what you all are doing. I said yes to this because I think that this is really important.”

Having clean, healthy buildings is undoubtedly important for many. It’s especially so for the International Well Building Institute, which is using its seal as a gateway into its broader building certification services.

“What’s been exciting for us is that a lot of our customers who are entering in through the Well Health-Safety Rating are now beginning to upsize their commitment to achieve a full-on wellness certification, which is so important,” Hodgdon said.

The certification covers 10 categories, including such easily measured things as air and water quality, sound and temperature, and harder-to-pin-down items such as mental health, community “connectivities,” movement and nourishment — all backed, Hodgdon said, by science and study.

Whether meeting all the standards in those categories will also lead to a building’s occupants becoming healthier and fulfilled probably will take a long time to prove. The company points to case studies — some done by its own workers and clients — that suggest the holistic approach pays off.

Read More:  ICUs are nearing capacity in this French city. And it's only September

Independent experts — scientists, doctors, engineers, mental and physical health experts, and others — who helped evaluate the initial standard described the concepts as sound.

“They asked provocative questions. They were interested in what experts had to say. I thought it was a pretty good process,” said Ellen Tohn, an assistant professor of epidemiology at Brown University who runs an environmental engineering firm and is listed as a peer reviewer.

Still there’s no guarantee it actually works. Even the well-regarded LEED program often doesn’t live up to its hope and hype.

“It seems rather obvious: Skepticism is in order,” said John Scofield, a physics professor at Oberlin College in Ohio who has extensively studied the LEED program.

Scofield noted that there is very little empirical data that can be used to verify the effects of certification programs, since landlords often refuse access to researchers.

“Owners have little to gain by allowing someone to study the performance of their building. They have already garnered the green publicity and marketing that goes with the label,” he said.

“In the end, all of these programs, no matter how well-intentioned, turn into marketing and money.”

While Delos’ program appears to be the most ambitious attempt to create an independent arbiter of building health, there are others, including some run by nonprofits.

Another option for builders less focused on the mind-body connection and more on just air quality is the Environmental Protection Agency’s Indoor airPlus certification program.